STORY OF THE PEAHEN

My Mother's Day Tale
This is the story of how a peahen (female peacock) chose to make a nest in the planter outside my front door. It all began on March 31st when I noticed an egg in the middle of some succulents in the planter. I have seen that size of egg before because my neighborhood has about 75 peacocks roaming wild, left over from someone who had a few but moved away and left them here. I have seen, every spring, the peahens making their way through my property with anywhere from 2 to 7 chicks following behind. So I knew it had to be a peacock egg. 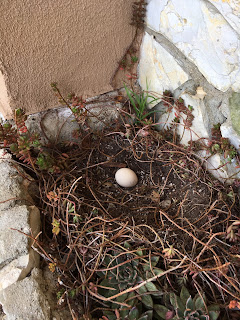 This lone egg sat there for several days. Then, day by day, more eggs began to appear. 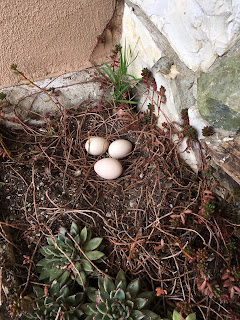 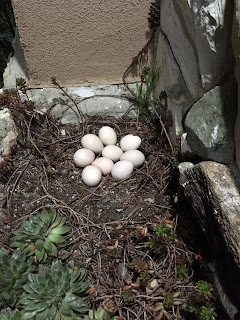 By the time there were 10 eggs, the peahen began to sit on the nest for many hours a day. She would leave for a short time, I guess to get something to eat. She would have visitors, both male and female. We called the females the aunties. For many weeks, it was like a baby shower out there. 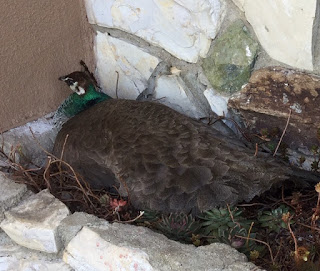 I did some research and learned that it takes 28 days for peacock eggs to hatch. It was confusing since it had already taken over a week for the 10 eggs to be laid. But sure enough, 28 days after the tenth egg appeared, I came out in the morning to check and this is what I found. 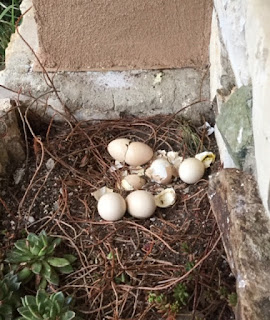 Peahen gone, six broken egg shells, four whole eggs. It was a cold and rainy morning. I searched around but found no sign of any mother or chicks. Then I heard outside my office window the sound the peahen makes to keep her chicks following her and saw them crossing the driveway. The best shot we could get shows only two of the chicks but there were definitely six. The mother had led them to our green waste receptacle and was hiding them there. 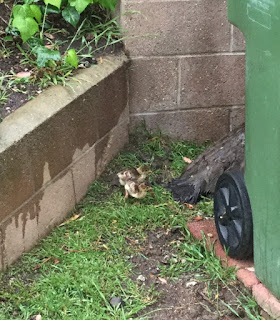 About an hour later I found them under some bushes by the driveway. Sorry no photo. She was really good at hiding them. Later still I found her down near our street behind my rock garden sitting on all the chicks, keeping them warm and dry. Soon they were no longer there and I have not seen them since. I surmised that she had laid more eggs than she could hatch because she never returned to the nest.

I have had a negative attitude to these creatures because they eat my favorite flowers, they walk all over my low shrugs breaking branches and of course they poop incessantly. This experience changed my attitude. Checking on that mother every morning and several times a day for four weeks, we got to have a relationship of sorts. She did not seem to fear me. I was sorry not to have seen the actual hatching.

Now I am on the lookout for a peahen with 6 somewhat bigger chicks trailing along.
Posted by Judy Krueger at 7:22 PM