THE TEARS OF AUTUMN 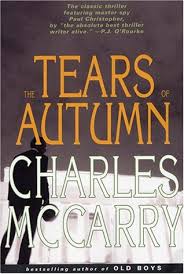 The Tears of Autumn, Charles McCarry, The Overlook Press, 2005, 276 pp
I only learned about Charles McCarry because he passed away in February of this year. When I discovered he wrote spy thrillers, I got The Tears of Autumn for my husband, who found it great. The series features Paul Christopher, a secret agent. McCarry was a former undercover operative for the CIA before he began writing. I had to read it!
Christopher has a pretty good idea who arranged the assassination of JFK and the book tells the story of how he went about verifying his suspicions. Due to his many years in the system he has contacts all over the world and his superiors in the agency trust him. It is a startling theory about one of our country's unresolved mysteries and a well written, highly suspenseful read. When Paul Christopher presents his findings, the powers that be decide to keep it secret.

I am not into conspiracy theories but then again I find some of them plausible. This one, especially in light of our current political scene, made me ponder how much regular citizens actually know about what goes on. If you like such stories, you should read this one.

(I found the copy I read at my library. The book is apparently not in print otherwise but can be found at used sellers and as an ebook or audiobook.)
Posted by Judy Krueger at 12:51 PM