THE PASSAGE OF POWER 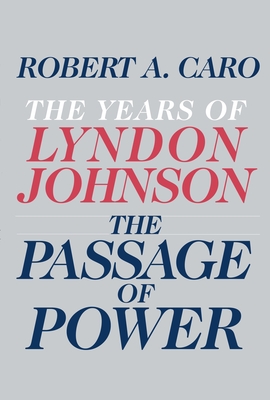 The Passage of Power, The Years of Lyndon Johnson Book 4, Robert A Caro, Alfred A Knopf, 2012, 605 pp
I have been reading Robert Caro's four extensive volumes about the life of Lyndon B Johnson over the past two years. The experience has been a master class in politics, power, the workings of the House of Representatives and the Senate, the interaction between the Executive and Legislative Branches, and 20th century history up to 1964.
The Passage of Power begins with LBJ, still in his role as the most powerful Senate leader possibly ever, trying to decide if he will run for President in the 1960 election. Because he waffled for too long, he did not get the nomination but was asked to be running mate for John F Kennedy. Becoming a vice president under JFK was a huge descent in influence and an almost complete loss of power.

Then JFK was assassinated and in the space of a few hours, LBJ was in the position he had dreamed of and schemed to reach for most of his life. The next chapters cover his first hours, days, and months filling this new role. That part was as exciting as the parts in Book 3, Master of the Senate, when he achieved his power there and gave that body a 20th century makeover.

The final section covers how he used his Senate leader experience to get passed the Civil Rights Act in 1964.

I came of political age in the mid 60s at the height of protests against the Vietnam War. My opinion of this man was formed and largely colored by what happened in those years. My friends and I purely hated him. I am glad I took the time to read so much about him. He was deeply flawed but now I am aware of how much influence he had during his presidency and how much change he brought about.

I understand him now as quite a Machiavellian figure whose strengths could overcome his weaknesses. Robert Caro is still writing the final volume but I want to read it immediately. At the end of The Passage of Power, Caro makes it clear that he feels LBJ held his baser instincts in check long enough to get much positive legislation passed but that his momentum and that of our country would be lost because of Vietnam.

I realize that many people do not have the time to read almost 3000 pages about one POTUS, but anyone who does will learn much about politics and the role of government in America. Having read these books, I feel smarter, more able to parse the news, make sense of what is happening today, and hopefully make the best use of my right to vote, a right for which so many women before me have fought.
Posted by Judy Krueger at 10:17 PM