AWARD WINNERS OF 1965 PART ONE 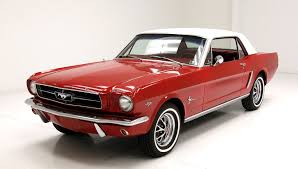 This weekend I will bring you some mini reviews of books that won the big prizes in 1965. Above is a 1965 Mustang, possibly the hottest car of the year, just to give you a bit of lore. For My Big Fat Reading Project, I always read the award winning novels of the year. These days there are over 20 such awards and it is impossible to keep up. In 1965 there were just 8 on the list. Below are the first four. 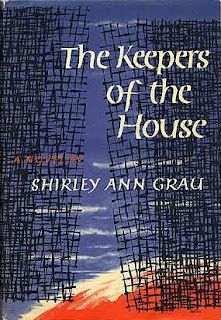 The Keepers of the House, Shirley Ann Grau, Alfred A Knopf, 1964, 239 pp
The winners are usually published during the year before the prize is awarded. This was a family saga spanning generations of the Howland clan from the days of Andrew Jackson to the 1960s. Abigail Howland is a seventh generation daughter. Her grandfather, also a central character, is an eccentric who still maintains the family's wealth and standing in his Deep South community.
It is extremely well written yet for all its literary quality is a page turner. Civil rights have become law in the nation but as we all know, that law does not penetrate into southern towns much, even to this day.
While William Howland is a fascinating character, his granddaughter Abigail was more interesting because of her increasing awareness as a woman, as a white woman, and ultimately as a fierce warrior for her own rights. How hard it is for people who have viewed life in a certain way for centuries to change those views!
The novel is a look at changing race relations from the white point of view. The entire gambit, from descendants of slavery to the violent men who join the Ku Klux Klan while carrying on with Black women to the "genteel" society white women must navigate is braided together in a gripping tale.
The Newbery Medal: 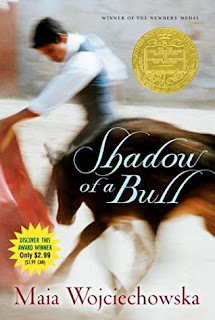 Shadow of a Bull, Maia Wojciechowska, Atheneum Books, 1964, 155 pp
The first of two major awards for children's books is the Newbery Medal, for books meant for kids aged 8-12. This is a wonderful story about bullfighting. Though it is not a sport I would ever want to attend, bullfighting is an integral part of the culture in Spain.
Monolo Oliver is the son of the greatest bullfighter in all of Spain, who lost his life in the ring. It is expected that Monolo will repeat his father's success but the boy definitely does not feel any urge to fight bulls.
Still he tries to find his courage. Some of his father's friends teach him the sport and the day comes when he must face his first bull.
In a vibrant coming of age tale, Manolo figures out how to deal with the pressure and find his own way in the world. Wonderful writing and plot. Lots of info on bullfighting, including a glossary. Immersion into the culture surrounding the sport.
The Caldecott Medal: 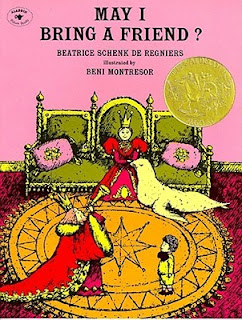 May I Bring A Friend?, Beatrice Schenk De Regniers, Atheneum Books, 1964, 48 pp
The Caldecott Medal is an illustrator's award for picture books meant for younger children.
In this colorful story, a young boy is invited to tea by the King and Queen. He asks if he may bring a friend and they say of course! He brings a giraffe. A lovely time is had by all.
Next he is invited for six more days in a row and brings a different animal, or three, each time. The royal figures love every one.
The illustrations by Beni Montressor, exhibit a color scheme of many shades of purple, yellow, red and orange. A true feast for the eyes!
The National Book Award: 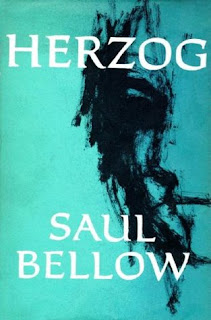 Herzog, Saul Bellow, Viking Press, 1964, 371 pp
Saul Bellow's winning novel was also #3 on the 1964 bestseller list. I reviewed it here and enjoyed it probably the most of the 1965 award winners.
I will be back soon with the remaining awarded books of 1965.
Have you read any of these books? In their own ways each one gives a feel for the mid 1960s.
Posted by Judy Krueger at 11:41 AM