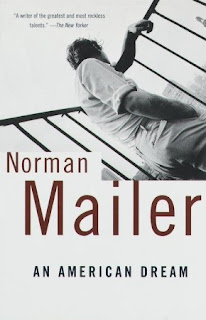 Norman Mailer. Was he just a bad man, misogynist, and curmudgeon? Or was he a deep thinker, great writer and possible genius? I think probably both. He was full of himself as a younger man and he liked to antagonize anyone he could. He certainly had trouble with females. Do I read him because it is sensible to know the enemy? No, I think he was so perceptive concerning American society. I aways get insights from his books.

An American Dream was his fourth novel and came ten years after his third. It is a day in the life of Stephen Richards Rojack in which he murders his wife, makes it look like a suicide, faces the cops, starts an affair with another woman, confronts his enormously wealthy father-in-law, while staying drunk the whole time and facing all his demons.

The story is gritty, violent, sexy and psychological in the extreme. I don't particularly recommend it to anyone, but perhaps some men who read it will see themselves and some women will go, umhum, yes, that is what we are up against. In other words, read it at your own risk.