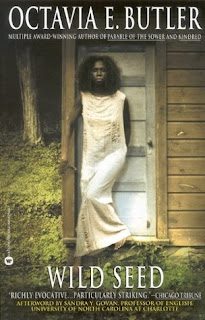 This is the last book I read in 2020, for The Tinies reading group. We have not yet met to discuss it because one of us is ill (not COVID thank goodness) so I can't report on what they thought. I found it a tricky book to review because it contains multitudes but here goes.

Wild Seed is one in a series called Seed To Harvest. This book in that series is a somewhat alternate history beginning in Africa in 1690. Slavers are industriously capturing natives and shipping them off to America. Anyanwu is a healer, a shapeshifter, and is 300 years old. She does her best to protect her village from the slavers.

Doro comes upon that village. He had been inspecting what he calls his seed villages. What is a seed village? It is the crux of the whole story. Doro is over 1000 years old. When a body he inhabits becomes old or less useful, he jumps into another one after killing the previous owner. Just to give you some idea of the character.

Doro has been engaged in a centuries long project to breed people of his race, developing individuals with superior powers and traits. He has brought many of these people to the New World, not as slaves but as almost mystical beings who can fight the powers of oppression.

Upon meeting Anyanwu, he recognizes her special powers and wants to use her to breed more people with such powers and add them to his groups. He also is aware that she is what he calls a wild seed and will need careful handling. So begins a power struggle between the two. Doro may be ruthless but Anyanwu is in some ways the stronger of the two because she has certain characteristics that he is lacking.

To America they go. Two hundred years go by bringing the story to 1840, before the Civil War but during the beginnings of Abolition. Doro and Anyanwu remain locked in their struggle. He demands complete obedience, she refuses to submit fully. She bears many children and suffers many tragic losses but fills a role that Doro cannot: healer, mother and a bit of a check on Doro's power.

The extremes of fantasy and the levels of violence in this tale of visionaries and psychics ride on a knife-edge of madness. It could be too much for some readers. I was fascinated and could not look away. Anyanwu is a heroine of mythic proportions and I had to know if she would survive under Doro or if she would escape.

A word about this series: I read Wild Seed in a 4 book collection, Seed To Harvest. The books in the collection are not arranged in order of publication. I searched for the reason. This collection was published just a year after Butler's death. Some sources say that she wanted the series released in the chronological order of the story, even though she wrote that chronology out of order. Originally the series was called the Patternist Series after the first published book, called Patternmaster. That novel is the last in Seed To Harvest.

From what I could find, readers are divided on the issue of whether to read the 4 books in publication order or chronological. Since I have seen this kind of thing happen with other science fiction series, I decided to go with the chronological option as presented in the collection. I will keep you posted as I read the other three books.

It looks like the four novels get into even wilder scenarios including a far future cosmic invasion! Can't wait!!