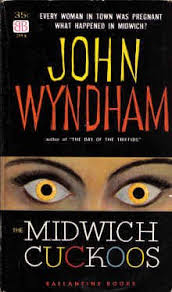 The Midwich Cuckoos, John Wyndham, Ballantine Books, 1957, 247 pp
I have now read four of John Wyndham's intelligent speculative fiction novels. I did not read them in publication order but am filling in the ones I missed. His books are sometimes called frightening but I find them intriguing. His style is so conservatively British that it counteracts the frightening bits for me.
Midwich is a small English village that keeps to itself and is rather behind the times. One September evening a mysterious silver disturbance descends on the village and remains for 24 hours. Afterward no one is harmed but within a month all the females of childbearing age find themselves pregnant.

The village minister, the main busybody female, a late-middle-age historian/writer, and MI5 all get involved, trying to contain and manage the potential shame, hysteria and upheaval. Each one of these characters has an agenda.

The children born from this seemingly extra-terrestrial incident are somewhat detached and have strange powers including a mind meld capacity and an ability to make people behave oddly. If they don't they die.
I found it a darn good read. The husband of one of my good friends is a UFO researcher and just last week our government conceded having knowledge of and years of collected data on UFOs. Did I enter the Twilight Zone?
Posted by Judy Krueger at 8:20 PM