THE SILENCE OF HERONDALE 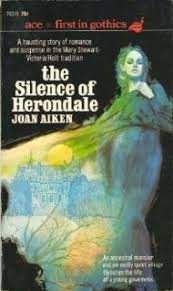 The Silence of Herondale, Joan Aiken, Doubleday & Company, 1964, 185 pp
I first discovered Joan Aiken in 1991. That was before the internet, so my method for finding books was the library. Remember those days? Ever since I first read A Tree Grows in Brooklyn I had dreamed of following Francie's method of reading all the fiction in the library from authors whose names started with A all the way to Z. I never finished the A's! I did get to AI and there I found Joan.
I read eight of her novels for adults in the 90s and remember many of them fondly. Now all the rest of her books are on My Big Fat Reading Project lists.

The Silence of Herondale was her second stand alone novel. It is a Gothic mystery with the requisite creepy elements and romance. The storytelling is just as smooth as I have always found in her books. Though reminiscent of early Mary Stewart and somewhat in the style of Agatha Christie, it has its own flavor and does not feature a detective.

Deborah Lindsay, originally from Canada, is down to her last few pounds. Her parents died tragically a couple years ago so she is trying her luck in London, living in a boarding house, attempting to make a living writing for magazines. Her room was recently pillaged by a robber.

She has accepted a job as governess to a teenage girl, Carreen, a prodigy who has already written several plays produced on the stage to great acclaim. Everything seems just a little off, especially Carreen's guardian who hired her, but she has taken the job simply to survive.

Soon enough all goes quite wrong. Deborah and Carreen land in a crumbling mansion outside the small English town of Herondale, where the girl's uncle has just died, where her slightly shady cousin has turned up, and where nobody in Herondale is talking.

The characters are great, the several mysterious aspects of life in Herondale create suspense and both Deborah and her charge find themselves in danger. It was another refreshing palate cleanser from the rigors of Sisters In Law. I could let Deborah take all the risks and let Joan Aiken explain it all to me.
Posted by Judy Krueger at 10:55 PM