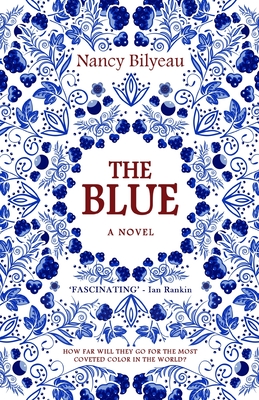 The Blue, Nancy Bilyeau, Endeavor Quill, 2018, 434 pp
This novel is a wonderful modern example of historical fiction written in the style of Daphne du Maurier and Mary Stewart, complete with a brave and reckless heroine, romance and both English and French settings. The "Blue" is a color used to paint on porcelain, tricky to formulate and much sought after in 18th century Europe, where porcelain is all the rage and making fortunes for it producers.
Genevieve Planche, our heroine, is an English-born descendant of Huguenot refugees from France. All Protestant sects in France were hounded, persecuted, imprisoned and even burned at the stake in the 16th and 17th centuries. Those who emigrated found acceptance in England as well as in other European countries and the United States. In fact Nancy Bilyeau is a Huguenot descendant.

Genevieve at 24 years of age is not interested in porcelain. Her dream is to be a famous painter in the "historical" style (Rembrandt, da Vinci, Michelangelo), a profession open only to men. She cannot even find a teacher willing to take her on. Instead, she finds the deceptively charming and seemingly wealthy Sir Gabriel Courtenay, who strikes a deal with her. If she will go as a spy to the famous English Derby Porcelain Works and steal the formula for cobalt blue paint, he will finance her art studies in Venice.

So eager is she to get to her goal, she goes with only minor trepidation off to Derby, posing as a painter of flowers on porcelain plates, cups and bowls. She impresses the owner and manages to get access to the young scientist who is working on the cobalt blue formula. She also falls in love with him and he with her. From that moment on she suffers conflicted emotions and puts both herself and her scientific lover in great danger.

Before long, they find themselves captives of King Louis XV, whose investment in the French porcelain factory, Sevres, makes him avid to get that formula for the Blue.

I loved the novel for the story itself, for the history, and the great characters. My two fellow members of the Tiny Book Club, whom I had convinced to read it, were less enraptured. They found the writing style and plot somewhat improbable and Genevieve too ditsy or something. They were however, quite excited to learn about porcelain. I, of course, encouraged them to read du Maurier and Stewart for other excellent examples of the genre on which I thought Nancy Bilyeau based her approach.
The Tinies held our meeting at The Getty Museum of Los Angeles, first touring their exhibit of French and Chinese porcelain. I was amazed to see that the Chinese, who invented porcelain in the 7th century, had an even more vivid blue than the French. The afternoon came to be one of our most wondrous meetings.

******************
This next part is addressed mainly to bloggers:
Yesterday I read about some snarky pronouncements made by an author regarding bloggers: that we don't buy the books but only get free review copies (as do the "critics"), that we don't use the methods of literary criticism and take attention away from the "better writers." Hm.
Both of the other Tinies and I bought our copies of The Blue. Some of my fellow bloggers do accept free review copies, but we also buy tons of books and do our best to present balanced, well thought out reviews.
If not for reviews from Helen at She Reads Novels and Emma at Words and Peace, I would not have learned about this novel, read it and passed it on to you my blog followers. What say you?