AND BOTH WERE YOUNG 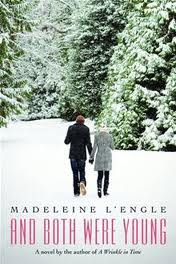 Madeleine L'Engle's career did not take off until the publication in 1962 of A Wrinkle in Time, which went on to win the Newbery Medal and remains her most well known book to this day. But she began writing adult novels in 1945, novels that were published but did not sell very well and quickly fell out of print. She almost gave up writing in 1958.

Had these early novels been around when I was in my teens, I would have read and loved them I am sure. Reading them now, I like them better than A Wrinkle in Time.

And Both Were Young was her first novel for young adults, published in 1949. It was revised and reprinted in 1983 and that is the version I read. In the Foreword to the revised edition, Ms L'Engle says, "When And Both Were Young was first published, there were a great many very simple things that could not be put in a book that was to be read by children and young adults." She goes on to mention attitudes about death and sex in those days. She says, "So the portions that are now in the book that were not in the original are truer to the original typescript than what was actually printed." Good! I did not miss anything by reading the later edition.

No matter her understandable discouragement, L'Engle's early novels are well written with more believable characters than much of the fiction I have read from the 1940s and 1950s. Her female characters especially say and do things just the way actual people would.

In this novel, Flip (nickname for Philippa), has been sent to boarding school in Switzerland, just one year after her mother died. Her father, whom she adores, is an illustrator of children's books. He has a new woman in his life who "lusts after him" as Flip says, and whom Flip cannot stand. His current assignment will take him to China, a place he considers unsafe for Flip. The solution is boarding school and daily letters back and forth.

Flip is homesick, still missing her mother, angry at being abandoned, and hating the new woman; all appropriate feelings for a 14 year old girl. She does not fit in and cannot make any friends. But she is a Madeleine L'Engle creation, so figures out how to sneak away from the confining regulations at school and walk by herself in the woods. She meets Paul, who is also troubled and angry for his own reasons. Slowly and beautifully they become friends and then fall in love.

One could complain that a few too many unlikely coincidences bring Flip and Paul through their troubles to a happy ending. One could also make the same complaints about the Twilight series, but Madeleine L'Engle does it without vampires or werewolves, in 241 pages, and with just as much sexual tension.

And Both Were Young was reissued in hardcover by Farrar, Straus and Giroux in 2010; then in paperback by Square Fish in 2011. It is for ages 12 and up. I think the book would make a lovely Christmas gift for any female teen on your list who loves to read.


(And Both Were Young is available in hardcover, paperback, audio and e-book versions by order from Once Upon A Time Bookstore.)