A CASE OF CONSCIENCE 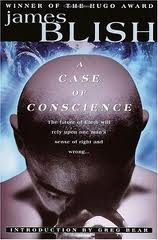 I am not well read in the science fiction genre, but in comparing A Case of Conscience to science fiction novels I have read, it stands as one of the oddest. It won the Hugo Award in 1959.

A four man exploratory team is investigating Lithia, the first planet found so far with sentient life. The aliens are reptilian, have no experience of faith or religious belief, and their complete reliance on reason has produced a society devoid of evil or sin.

Father Ruiz-Sanchez, a Jesuit and a biologist, is one member of this team, who are charged with recommending to their superiors what should be done with Lithia. The physicist on the team proposes making it into an atomic research planet, but the Jesuit decides it is a product of the Devil and wants it sealed off to protect mankind from temptation.

My only knowledge of Jesuit scientific philosophy come from Mary Doria Russell's excellent novel, The Sparrow. James Blish did nothing but confuse me as I attempted to follow the reasoning of Father Ruiz-Sanchez. (Hilarious plot element: the Jesuit is studying Ulysses by James Joyce to learn more about the Devil.)

In the second half of A Case of Conscience, the team returns to Earth with one of the alien creatures. This little Lithian grows up to become a psychopathic menace to society; a character who could have been created by Truman Capote. Is this supposed to prove the Jesuit's theory?

The book was actually a good exciting read. I just could not figure out what the author meant by his obviously deeply pondered theme of science vs religion. Does anyone want to help me out here?


(A Case of Conscience is available in paperback by order from Once Upon A Time Bookstore.)