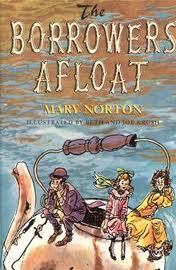 In the third book of The Borrowers series, the family takes to the water. At the end of The Borrowers Afield, Pod, Homily, and their daughter Arrietty finally arrived at the cottage where Uncle Hendreary and his family lived. Their dwelling was between the walls behind the fireplace in the cottage of the gamekeeper for the Big House.

Initially they were all relieved to have found shelter and safety, but in this story it soon became apparent that being dependent on relatives and in very cramped quarters was far from ideal. Arrietty had become used to the wide outdoors and began to pine away for more space.

When the cottage humans moved out, leaving no food or other necessities for "borrowing" a crisis was reached. Arrietty and her family decided to move on.

This time they head for a miniature village called Little Fordham, all Borrower-size, where human visitors pay admission to wander through. The plan is to float two days down the river in an old teakettle.

The escape, the river journey and another run in with the Gypsies make for dramatic adventure. Homily gains even more strength, daring and insight. While Arrietty and her father have always been brave and resourceful, Homily is the true heroine in this book.

The Borrowers Afloat was the most exciting story in the series so far, though reading the books in order makes each story mean more.


(The Borrowers Afloat is available in paperback by order from Once Upon A Time Bookstore.)