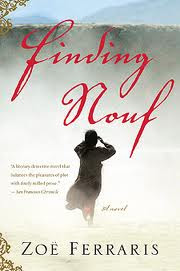 This book was a reading group read. Fortunately I had wanted to read it anyway because it is a mystery set in Saudi Arabia.

Nouf, sixteen year old daughter of a wealthy Saudi Arabian family, is found dead in the desert after she had been missing for ten days. Nayir, family friend, desert guide, pious but single Muslim, is asked by Nouf's family to find her murderer, even though the family had also paid off the authorities to avoid any police investigation.

When Nayir determines that the family does not really want to know what happened to Nouf, he begins to investigate on his own. This requires him to interact with Katya, a female from the coroner's office. Katya is single and relatively free for a woman. Though she must wear the veil when out of her house and have an escort wherever she goes, she causes Nayir many uncomfortable moments with her forward ways.

So the book puts a different spin on the mystery genre because of the setting. Looking at it from another viewpoint, the author's decision to write her book as a mystery is a brilliant ploy because it gets a broad readership to learn about modern Saudi Arabian culture and the ways of Muslims.

The mystery is well done, if a bit slow to get started. A bit of romance, Muslim style, between Nayir and Katya brings the interaction between the sexes to life. The scenes in Nouf's home clearly depict the stifling protection under which every female there lives. Ferraris spent some years in Saudi Arabia and her nuanced picture of the conditions for women and the slow changes in their status comes across as very true to life.

I was also fascinated by the way American culture and ideas get past the walls, the burkas, the protective parents, and infect female teens with the longing for freedom. Equally gripping was the progress for Nayir from an obsessively pious Muslim to a man enlightened about women.


(Finding Nouf is available in paperback on the shelves at Once Upon A Time Bookstore. It is also available in hardcover and ebook by order.)