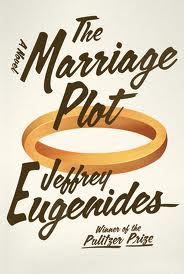 A new novel by Jeffrey Eugenides is a big event. It has been nine years since Middlesex. Though this is a much different sort of story I enjoyed it just as much.

The Marriage Plot begins in the middle of the story on the day of Madeleine Hannah's graduation from Brown University; the day after her breakup with Leonard and the morning after the kind of night you can never tell your parents about. Weaving between past and present, he brings the reader up to date on Madeleine's love triangle featuring Leonard , the brilliant but bipolar science geek and Mitchell, Religious Studies major of Greek descent whose dearest wish is to marry Madeleine. But Madeleine loves Leonard. But Leonard is crazy.

I mentioned the other day about the threads of college and Greece in my recent reading. Here they are again. Later in the story Mitchell goes on a quest for religious experience which begins in Greece.

Madeleine is an English major and on the first page alone, eleven authors are mentioned. She met Leonard in a semiotics seminar and her senior thesis is called "The Marriage Plot." A reading geek like me just loves books about books and writers and stories and plots.

For the remainder of the novel Eugenides moves around the triangle until we know all three characters about as well as you can know anyone. I became intimately involved with both the manic and the depressive Leonard. I followed Mitchell as he searched for the meaning of his life. And while Madeleine can be maddening with her middle class ideas about cleanliness, relationships and duty, she is also admirable for wanting the independence and selfhood promised to young women in the 1980s. I wanted all three characters to get what they wanted even though it was impossible.

Eugenides has a way of meandering with his own plots, but he still burrowed into my heart. With plenty of humor he satirizes the early 80s and especially the Semiotics era of literary instruction. "Reading a novel after reading semiotic theory was like jogging empty-handed after jogging with hand weights."

He is wordy, his prose is never flashy. Like a good friend telling an overlong story, he goes on and on, but the result is an immersion into a time, a place, and a big idea. Hermaphroditism is a big idea. Romantic love is a bigger idea. But Madeleine and her boyfriends are not ideas. They are unique individuals newly graduated from college who are each discovering how to turn their passions into a life that can be lived.

Ultimately The Marriage Plot is very much a moral tale while at the same time being a literary romp through 80s style sex, love and marriage. I think both women who don't hate themselves and men who like women will find it absorbing.


(The Marriage Plot is available in hardcover on the shelf at Once Upon A Time Bookstore. It is also available by order in eBook and audio editions.)