ANNE MCCAFFREY HAS LEFT THE PLANET

Anne McCaffrey was a prolific science fiction and fantasy writer. She passed away at her home in Ireland this past Monday, November 21. She was 85, born on April 1, 1926.

I first discovered her books when I bought a used book containing the first three books in her Dragonriders of Pern Series. I read Dragonflight, the first in the series, in 1992. I liked the characters and the concept but was only mildly impressed. 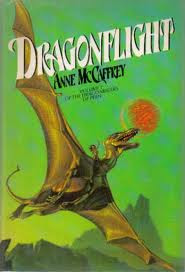 Back then I had started my reading log but was not very good at writing about the books I read. Here is what I had to say about Dragonflight:

"Dragonflight takes place on Pern, a planet colonized by Earth. About every 200 years another planet swings into Pern's orbit and drops "threads" which are very destructive to vegetation on Pern. This is the story of how the traditions which keep Pern safe from thread, including dragons and their riders (an elite race called Dragonkind), have fallen into disrepute over the past 200 years and must be revived. Threads are about to fall again.

The heroine, Lessa, is a feisty, courageous, and impatient young woman who usually turns out to be right and saves the day. I liked it a lot. The dragonkind get bonded with their dragons when the baby dragon hatches and can communicate by telepathy. The dragons are more level-headed than the humans."

I went on to read many more in the Dragonriders series, growing more and more impressed by Lessa and caught up in the whole dragonrider thing. Dragonflight was first published in 1968 and I always thought that the thread concept was based on the napalm dropped during the Vietnam War.


My next discovery was the Crystal Singer Trilogy. Those three books are my favorite Anne McCaffrey novels because of Killashandra Ree, the heroine, who is a failed singer, a tough chick along the lines of the Dragon Tattoo girl, and has a fabulous lover named Lars. 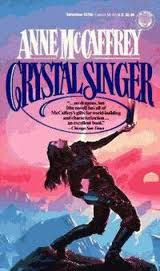 "Great science fiction. Killashandra Ree doesn't make it as a singer after years of training but makes it big on another planet 'singing crystal.' (Crystal is a valuable commodity which must be mined out of rock by means of hitting it with a clear note sung in perfect pitch.) The price she pays is being forever captive to the planet Ballybran and forever addicted to the pleasures inherent in handling crystal.

Not much freedom but high adventure for Killashandra."


This is the sequel to Crystal Singer. I had this to say:

Killashandra goes offworld on an assignment, falls in love and helps bust a mind control operation. She loses her lover and suffers a complete memory loss. But the lover ends up on Ballybran as a crystal singer. Again good adventure as well as romance." 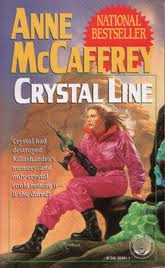 The final book in the trilogy was Crystal Line. My extremely short comment contains spoilers:

"Killashandra goes through numerous changes and finally gets her memory back. She and Lars (her lover) take over the Guild and attain eternal love."

The series made a huge impression on me, got me back into music after a rather long absence and made me feel that all my attempts to save the world in my early adult years were worth the adventures I had. I even named my indie record label "OffWorld Records."

Finally, in 2004 or so, my husband and I took a trip to Ireland. Thanks to Anne McCaffrey's website at the time (apparently no longer on the internet) I figured out how to email her and how to find her house in the Wicklow Mountains. On the site at the time was a google earth type map by which you could sort of fly in as though you were a dragon. She also had an open invitation to come to tea.

I didn't get an answer to my email before we left but we decided to try to find her house anyway. Well, actually my husband was shocked that I would be so bold and afraid we were being rudely intrusive, but I insisted. We got completely lost but then came upon a coffee house out in the middle of nowhere, which is so Irish. I had a feeling we were close and figured that if anyone would know the whereabouts of a famous local author, it would be the coffeehouse staff.

Sure enough. We got directions along the lines of: Go down that road. When you get to the fork with the big tree, take the left fork. Curve around a few times and you will see the house.

Well we did and we found it! The house, her stables and all, looking out over the mountains. The front door was ajar and I heard voices, so I called out, walked in and found Anne in her kitchen with a young woman and her father who were visiting from Australia! Anne offered us tea or coffee. Since we were American she totally understood that we might prefer coffee. She was so relaxed and gracious, as though these visitors were an everyday occurrence.

She gave us a tour of her house, her office, her library. Her walls were covered with works of art by fans; drawings of dragons, suggestions for book covers, etc. Her library was a hallway that ran the entire width of her house with shelves on each side. Then she took us out to the stables. She told us she could not ride anymore due to arthritis but still kept a couple horses and boarded others. A totally energetic, wiry, semi-friendly woman took care of it all.

After posing for pictures with us, she walked us back to our rental car. The last time I saw Anne McCaffrey was in Hollywood at the Writers of the Future Awards, about four years ago. She looked not a bit older and was smiling, cracking jokes and signing books. She was known for being extremely open and interactive with her fans, encouraging new writers, accepting all that proposed book cover art. I felt all of that when I saw her that day. She just did not seem one bit bothered by any amount of people.

For me she was an example of a woman who did what she wanted, had a great time doing it, and would never consider she should not do something just because she was a woman. A huge shining creative spirit.

Email ThisBlogThis!Share to TwitterShare to FacebookShare to Pinterest
Labels: In Memoriam