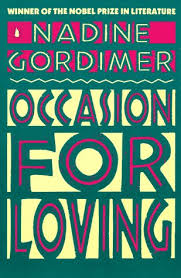 Occasion For Loving, Nadine Gordimer, The Viking Press, 1963, 308 pp
I wasn't sure I was in the mood for a Nadine Gordimer novel but it was up next on the 1963 list of My Big Fat Reading Project. I opened the book and was immediately swept away by this story of an interracial love affair set deep in the days of Apartheid in Johannesburg, South Africa.
Jessie and Tom Stillwell are white liberals who do not countenance the "color bar." In fact, they claim not to see color. They live in a somewhat ramshackle fashion with four children, he a professor and she rather a job hopper but always working to support causes. When they agree to take in a young couple as house guests all of their views are challenged.

Boaz Davis is a frustrated composer turned musicologist, returning from Europe with his new wife Ann, to conduct research on Native South African music. He is an old friend of Tom Stillwell's so there seems to be no reason not to take him in. However, Ann is a young, free spirited woman who lives for pleasure and excitement with little regard for consequences.

Before too long, Ann engages in an affair with the well-known African artist Gideon Shibalo. The danger and upset she brings upon her husband and the Stillwell family is the plot. It is illegal for whites and Blacks to have a sexual relationship and the centuries of taboo behind the law make it necessary that the couple only meet in certain fringe areas of the city where the law is unlikely to find them.

Nadine Gordimer's writing is crystalline. I always have to readjust my reading for her. It is as though she chooses every word, constructs every sentence, in a deliberate attempt to pinpoint exactly what she wants to convey. As a reader, I cannot just cruise along on story but am pulled into her worldview and mannerisms. So I surrender and it is pure pleasure for me.

Having read much in the past two years about the Civil Rights movement in America, I found reading about the South African conflict fascinating. In America we brought slaves from Africa to help build our nation. In South Africa, the British and Dutch colonized a nation and enslaved the natives. So the insanity and inhumanity of racism, the laws and taboos, the economic justifications while similar, include subtle differences between the two countries.

If you saw the 2016 movie, Loving, you have an idea of the havoc that ensued when an interracial couple tried to live in the pre-Civil Rights times of mid 20th century America. In Occasion For Loving, Nadine Gordimer depicts not only the struggles of her lovers but also the effects on the whites who attempt to practice their liberal views. This is not so much a political novel as a personal look at the demands of one's moral precepts.

I can't recommend the book enough. It is Nadine Gordimer's third novel. I have read her two earlier ones and in Occasion For Loving she took a giant leap into the subject about which she would write for the rest of her life and for which she won the Nobel Prize.
Posted by Judy Krueger at 9:47 AM