ALL YOU NEED IS LOVE: THE PEACE CORPS AND THE SPIRIT OF THE 1960S 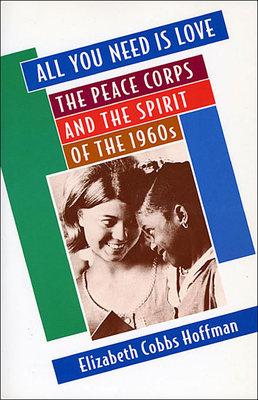 All You Need Is Love: The Peace Corps and the Spirit of the 1960s, Elizabeth Cobbs Hoffman, Harvard University Press, 1998, 259 pp
Summary from Goodreads:
The nation was powerful and prosperous, the president was vigorous and young, and a confident generation was gathering its forces to test the New Frontier. The cold war was well under way, but if you could just, as the song went, "put a little love in your heart," then "the world would be a better place." The Peace Corps, conceived in the can-do spirit of the sixties, embodied America's long pursuit of moral leadership on a global scale...More than any other entity, the Peace Corps broached an age-old dilemma of U.S. foreign policy: how to reconcile the imperatives and temptations of power politics with the ideals of freedom and self-determination for all nations.
My Review:
I read this as research for my autobiography. It is a history of the Peace Corps from its beginning as a program created by President John F Kennedy in 1961 through to the late 1990s. The Peace Corps is still going today though we don't hear much about it. After finishing the book I discovered that they have a presence on Twitter and now follow their posts there.
The book is good thorough history. It tracks the political scene all through the years covered, as the organization was built, and as changing times had their effects on the Peace Corps in its attempts to live up to American ideals.
Though sometimes a bit dry, I made it through the book at my usual non-fiction reading pace of 10 pages a day, finishing it in a month.
Of course I was aware of the Peace Corps during my high school and college years, but I was more aware of Civil Rights and the Vietnam War. I was strongly in favor of the first and rabidly against the second. Back then I thought I was "with it" but looking back now, I was in truth quite unsavvy when it came to politics. Most of what I knew came from radical friends. This book was like a crash course in what I had missed and dove-tailed nicely with the biographies of JFK, LBJ and MLK I have read over the past few years.
I find it odd that I never knew personally a single Peace Corps Volunteer and have still never met one to this day.
Reading the book made me rather sad about the lost idealism of the 1960s. Despite our current cynicism about the world, I think many boomers still wish we could get that spirit back. It got me wondering if the Cold War and all that has followed was not so much a political and ideological fight but a financial conflict between the "haves" and the "have nots" of the world. Certainly the "haves" hold the power with no intention of letting go or sharing or helping if that means giving up an inch of that power.
I recommend the book to anyone grappling with ideas, politics, the uses of power, and what that means for the future.
Were you ever a Peace Corps Volunteer or have you ever known one?
Posted by Judy Krueger at 12:33 PM