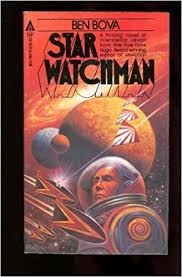 Star Watchman, Ben Bova, ACE Books, 1964, 217 pp
Many years ago I read Mars by Ben Bova, liked it, and decided to put the author on my Big Fat Reading Project lists. I thought that Star Watchman was his first book. Now I have found out it was his second and his first is either out of print or hard to find. So I am starting with this one and going on from here.
The human race has expanded into space and built an interstellar empire by taking over from an ancient alien race known as "the Others," a barbaric and ruthless sort who are still around with designs to recover their power.

Star Watch Junior Officer Emil Vorgens has been dispatched to investigate an uprising on Shinar, a relatively minor planet. He is rather out of his depth on his first mission and must man up, defy Earth's military leader on Shinar, and try to prevent an all out major war with the Others.

This was an entertaining story complete with three opposing forces: Earth, the Others and a revolutionary band of Shinar inhabitants. Vorgens uses his wits, his courage and his commitment to the role of Watchman to resolve the situation.

In Ben Bova's introduction to the edition I read, he says, "The problems of colonial wars...where major powers fight 'minor' wars in some Third World country were uppermost in my mind as I wrote Star Watchman." Those minor wars in the early 1960s were France in Algeria and the US in Vietnam.

Thus I found Bova's ideas about a better way for those two countries to handle such conflicts, as he portrayed those ideas in his story, quite interesting and applicable even to today's conflicts around the world.

Bova has written scads of books, won 6 Hugo awards and is still going with his latest book Earth just released this past July. I look forward to reading more.

If you have read Bova, which have been your favorite books?
Posted by Judy Krueger at 10:48 AM