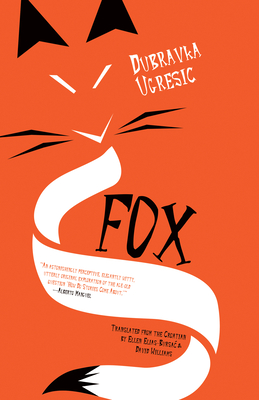 Fox, Dubravka Ugresic, Open Letter Books, 2018, 308 pp (translated from the Croatian by David Williams and Ellen Elias-Bursac)
This was my translated literature pick in November. For the third time in one month I found myself reading auto-biographical fiction. The first person narrator in Fox is, I am quite sure, Dubravka Ugresic herself. This is an author I have long wanted to read, who came onto my radar through various literary sites where I lurk as she began to receive acclaim a few years ago due to seven of her works being translated into English.
The author has lived in self-imposed exile from Croatia ever since the breakup of Yugoslavia. The result of her criticisms of nationalism there left her branded as a traitor.

Fox is thus biographical, following the life of an author living in exile in the Netherlands and including sections about writing process, attending literary conventions and speaking engagements, and returning for a heartrending episode to her Croatian home town. She uses the mythic figure of the fox as trickster to great effect throughout the novel, making the case for authors who travel across cultures. The through line asks the illusive question, "How do stories come to be written?"

Though I felt somewhat adrift in the long first chapter, A Story about How Stories Come to Be Written, I discovered as I read further that it was a brilliant set up for the rest of the book. I grew accustomed to her sly humor. Most of all, I reveled in the ways she pans the entire international publishing world. She is so bold I worried she might be accused of being a traitor to her own profession!

Currently I am making the progress of a snail through Rebecca West's Black Lamb and Grey Falcon, as that author travels through Yugoslavia in 1938. Her travels begin in Croatia and she relates the history and mixture of cultures there: Roman Empire, Slavic, Austro-Hungarian and Turkish. Reading Fox, I felt I had the long and troubled background to Dubravka Ugresic's current concerns. It was one of those delightful events of synchronicity that happen to readers.
Posted by Judy Krueger at 11:34 AM