WEB OF THE WITCH WORLD 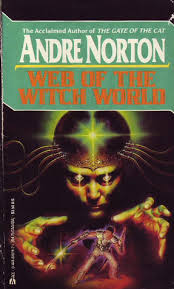 Web of the Witch World, Andre Norton, Ace Books Inc, 1964, 143 pp
Why am I reading Andre Norton? I only recently added her to My Big Fat Reading Project because I read some things full of praise for her. She has been called "grande dame of science fiction." She wrote a gazillion books, various different series, sometimes in collaboration with other authors I have loved (Marion Zimmer Bradley and Mercedes Lackey, to mention a couple.)
She took the pen name Andre Norton (her name was Alice) to avoid the barriers to women in the sci fi writing community of the 1940s when she began publishing and she snuck right in. She also combined fantasy and sci fi in a time when that was taboo among both fantasy and sci fi purists. Now that I have read two of her Witch World series books, I am hooked.

Web of the Witch World picks up pretty much where Witch World ended. Simon Tregarth entered this world by means of the Siege Perilous (part of Arthurian mythology, a kind of sorting hat/portal and destiny director--look it up.) He had landed in Estcarp, home of an old race, ruled by witches, and under attack from the evil high-tech Kolder, who were also from another universe. Oh yes, it is twisty!

Simon is a brave and wily hero. He fell in love with Jaelithe, a witch, and she with him. In marrying him she had to give up her powers.

Web of the Witch World continues the story wherein Simon must once again outwit the Kolder, who are as evil as it gets. Meanwhile, like the good independent woman she is, Jaelithe goes off on her own to figure out how much witch power she still has and how to use it.

The psychic connection between Simon and Jaelithe goes beyond romance to show how a man and a woman, an earth man and a witch, a hero and a heroine, can live and love and work together to fight destruction and evil. Andre Norton writes adventure and intrigue and battle scenes as well as anyone I have read.
Posted by Judy Krueger at 2:32 PM