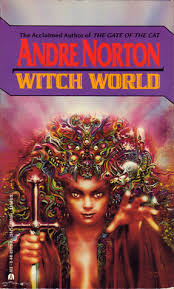 Witch World, Andre Norton, Ace Books, 1963, 173 pp
Another author, new to me. I decided to try her out after learning she is considered part of an almost forgotten triumvirate of women who were instrumental in developing science fiction and fantasy as it is today: Anne McCaffrey, C J Cherryh, and Andre Norton. I have read almost everything by Anne McCaffrey but until now nothing by the other two.
Another notable aspect of the three groundbreaking women is they felt no compunction about combining science fiction and fantasy in the same novels, something that had been a purist taboo. N K Jemisin, Charlie Jane Anders, Neal Stephenson and other current authors also combine magic and science. I like that.

Witch World begins with Simon Tregarth, a disgraced former Colonel in the World War II US Army, who is on the run. He meets a benefactor who escorts him through a portal into Witch World. Simon finds himself in this world of witches, decayed and super advanced science, and political intrigue. He knows none of the languages spoken there but aligns himself with one of the factions in its long running conflicts. As he fights with them he has to prove himself at every turn since he is from another world and they don't completely trust him at first.

The reader shares his confusion for most of the book as he learns about his new world as he goes. Having recently read both The Fifth Season and The Obelisk Gate by N K Jemisin, I was fairly accustomed to a good deal of confusion, so I proceeded, if slowly. By the end of the book I was hooked as well as oriented and amazed.

I could say more about the plot but I will just be dastardly and let you suffer through as I did. Simon Tregarth is a fabulous character. So are the witches.

I do love and admire Anne McCaffrey (whom I met twice) but Andre Norton is a much more sophisticated world builder, perhaps a bridge between McCaffrey and the sadly, recently departed Ursula LeGuin. In any case, I will be following Andre Norton's books in My Big Fat Reading Project and checking out C J Cherryh soon.

(Witch World is the first of a trilogy. The books are out of print as single volumes but I found an omnibus copy of all three called The Gates to Witchworld at the library.)
Posted by Judy Krueger at 10:09 AM