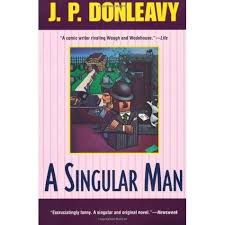 A Singular Man, J P Donleavy, Little Brown and Company, 1963, 352 pp
I was on the fence about including Donleavy's second novel on my 1963 reading list. I guess it was seeing somewhere on the web that his first novel, The Ginger Man, was Hunter S Thompson's favorite book that decided me. I know that does not make much sense, being the raging feminist that I am, but I am also a bit of an intellectual anarchist plus I don't hate men.
So I read A Singular Man and it was good, maybe almost amazing. George Smith is another character, like Sebastion Dangerfeld in The Ginger Man, who just can't fit in with society's expectations in terms of what makes a good man. Is that the basis of my attraction to J P Donleavy? Could be. The misfit equation.

George is an orphan, a failed husband and father, a stupendously successful business man and lonely as hell. He has enemies in the business world and truthfully he is a pussy grabber. I know, I know.

The writing style is a bit odd. Part stream of consciousness, part William Burroughs/Henry Miller cut-up smut. But it works. As I followed George through a pathetic winter in early 1960s New York City, I began to feel empathy for the guy. I got sentimental about him and his troubles even as I was laughing at his misadventures and feeling sorry for the women in the story.

His mysterious, tragic and unattainable lover, Miss Tomson, is almost on the level of Wonder Woman if Wonder Woman wore mink, drank like a fish, and was fabulously rich and famous in one of her guises. That does not make much sense either, unless you read the book.

After the disaster of how The Power was received at a recent reading group meeting, I have given quite a bit of thought to the battle of the sexes. (I saw that movie the other night. Great!) I am coming, somewhat begrudgingly, to the conclusion that just about every human problem comes down to a failure of empathy.

Why do people do the things they do? We can never really know, but there is always a reason. (That doesn't mean we should elect certain people to run our country though.) It is with annoyance and humility that I admit that a man, J P Donleavy, has given me another nudge in the direction of empathy.

Glad I read A Singular Man. I will keep reading this author. I always thought he was Irish, but he was Irish/American and lived in the United States.