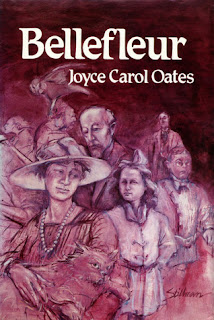 Back when the libraries were still closed, I went browsing through my own stacks of unread books and pulled out three Joyce Carol Oates novels I have owned for decades. One of those was Angel of Light, but from the dust cover flap I learned that it was preceded by Bellefleur, the first of JCO's foray into the Gothic genre.

I located the book in my library's eBook catalogue and dived in. The novel takes place in a fictional rendition of the Adirondack Mountain region of upstate New York. The Bellefleurs are a large clan who first became wealthy landowners shortly after the Revolutionary War.

The main characters, descendants of the most successful Bellefleurs, live in an enormous Gothic mansion on the shores of Lake Noir. Three generations currently live there but earlier generations continually spill out of attics, armoires, graves and legends. The family is down on its luck when the novel opens. The birth of Germaine, daughter of Gideon and Leah, sets the family on a ruthless plan to recover both their wealth and prestige. Germaine remains a small child through the rest of the book with special powers that drive the plot.

In the course of numerous unsettling tales of passion, violence, feuds, and reckless adventure we learn the family's history. It takes being able to hold a plethora of characters in one's mind. Since they all, dead or alive, reappear regularly I was somewhat able to keep track. A family tree helped as well.

If you like long novels as much as I do, Bellefleur is wonderfully immersive. Every character looms larger than life and a history of American economic greed in the name of progress is presented in all its horror. From reading world history I know there are such families in every era of civilization. JCO created for us one of our very own American families and I found an allegory for what we have been exposed to politically and socially in the 21st century so far. She wrote the book in the late 1970s so once again played her role as prophetess.