THE WINTER OF THE WITCH 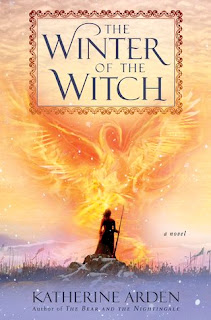 In this final volume of her Winternight Trilogy, Katherine Arden goes ever more deep into the conflicts that have powered all three books.

Vasilisa Pretrovna first appeared in The Bear and the Nightingale as a young girl who loved exploring the forest near her village in medieval Russia. She can see and communicate with the spirits who protect her house, yard and forest from evil. But her devout stepmother is determined that she either marry or be locked away in a convent. At 13, Vasilisa escapes to Moscow in search of her brother.

In The Girl in the Tower, she disguises herself as a boy and on her beloved horse, a magical creature himself, becomes involved in the struggle to save Moscow from forces both tribal and mysterious. These adventures attract the attention of the Grand Prince.

The Winter of the Witch brings Vasilisa into her full powers. She has been denounced as a witch, she has been targeted by the wicked Bear demon, and must flee Moscow to save her life. Her purpose though is to save Moscow and to unite the conflicting worlds of Christianity and the old spirits. Her true love, the Frost King, not even human himself, comes to her aid as do many of the spirits.

So in the final book there is more danger than ever for this brave young woman, there is war in which Moscow is outnumbered by its enemies, and she embraces all her powers. Thus her struggle is both external and internal. Despite horrific losses she prevails.

"What did we gain?" she asks the Frost King.

"A future," he replies. "For men will say in later years that this was the battle that made Rus into a nation of one people."

And the spirit world? Read the entire trilogy and find out!