THE PRINCES OF IRELAND 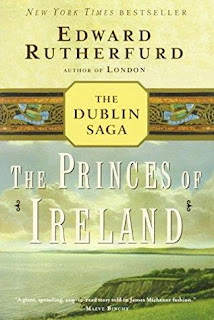 I attempted to read this historical fiction set in early Ireland years ago when we traveled to the country. Though it is like Rutherfurd's other books as well as like Michener's, in that it follows certain families through the generations, I just could not grasp it. It seemed like too much work.

Early in September I decided to read the biography of WB Yeats I bought last year when I was reading his collected poems. Starting the biography I realized Yeats's life was very much tied up with political events during the years he was writing and though I have read quite a bit of Irish fiction I still have confusions about those conflicts.

I still had The Princes of Ireland on my shelves so I gave it another try. My experience of reading The Thrall's Tale gave me a more determined approach and I found Rutherfurd's book less daunting. He provides maps and family trees. Perhaps I have become a better reader too!

I learned much of what I needed to know. Even though I had pored over maps before our trip there, I got a  better idea of the geography. I learned about the early years (400 AD) when the island's people were Celtic, arranged in families, clans and tribes and divided into five kingdoms, each with it own king.

Later came the Vikings, then the English and the French. St Patrick brought Christianity which gradually overtook the ancient religions, gods and spirits. The monks of Ireland are included in the book and some of those characters were the ones who kept the written scriptures from falling away during the Medieval centuries.

By 1533, the English were well ensconced as traders and financial leaders especially in Dublin. The Catholic Church and the Pope were in charge of religion but the Irish people, even those who intermarried with both the Vikings and the English, maintained certain differences and an individualism recalled in their poetry, songs, tales and monuments.

The book ends with a revolt against the English, rather a cliff hanger. There is a volume two in The Dublin Saga, entitled The Rebels of Ireland, which will take me to 1914. Since Yeats was born in 1865, I should be in better shape to understand his life and times.