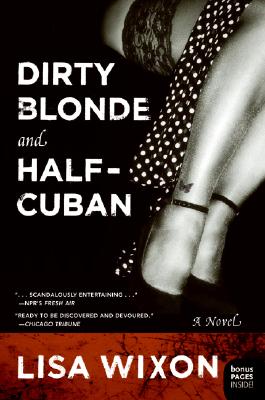 Dirty Blonde and Half-Cuban, Lisa Wixon, HarperCollins, 2005, 298 pp
I read this for my One Book At A Time reading group. We all mostly are drawn to a Cuban setting but due to some reviews I read, I had my doubts this time. So much so that I almost skipped the whole enterprise. I am glad I didn't.
The writing is not great, at least for a novel format. As it turns out, the author had a series on Salon.com called "Havana Honey," loosely based on her experiences in Cuba. She developed that into a novel which explains the writing style to me.

Alysia Briggs, a privileged American young woman, bound for college and a career in diplomacy, had made a death bed promise to her mother to find her real father, who is Cuban. The summer before starting college she decides to go and fulfill her promise. At the time, travel between America and Cuba is heavily restricted but her American "father" pulls some strings.

Alysia arrives in Cuba and all the cash she brought with her is promptly stolen. Because she is on a two month student visa, she is not allowed to have a job. She quickly learns that not much in Cuba is as it seems, that many women (and men) have a second job as sex workers, and she ends up joining them as a way to make some cash. She makes a friend who is a surgeon by day, earning less than $100 a week, and is one of the "jineteras" on the side. The woman becomes her mentor. Their clients are wealthy tourists.

In some ways the novel is a companion to my recently read Here Comes the Sun by Nicole Dennis-Benn. Except while that book was sad this one is more lighthearted. Eventually I got involved in all of Alysia's adventures as she learned the trade while continuing to search for her real father.

Most of all I liked the story for its look into what life in Cuba was like in the early 2000s. It was eye-opening! I also learned that not all sex workers are abused slaves, as the news would suggest. Not that I don't abhor the practice of indentured women; I do. However, since the beginning of time, women have practiced prostitution as a solution to making a living. I have decided that the distinction is worth making. In any case, what has happened to the Cuban people is the bigger crime.

Once again I took a chance on a book and came away with new knowledge about the world.
Posted by Judy Krueger at 10:40 AM