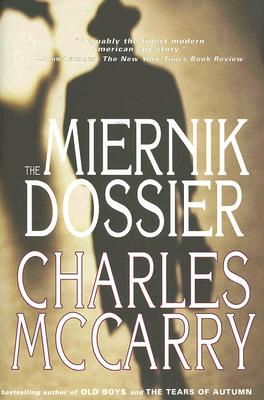 The Miernik Dossier, Charles McCarry, The Overlook Press, 1973, 256 pp
One of my duties as a wife is to find books for my husband to read. He enjoys this service! When I came across Charles McCarry, I thought we both might like him but The Miernik Dossier, his first book, got some worrisome reviews while his second, The Tears of Autumn, got raves. So I got the second one and we both found it excellent. Husband requested The Miernik Dossier, no matter what, and we liked it just fine.
Paul Christopher is the series' character. The Miernik Dossier is a spy road trip novel told via reports from different agents all working undercover at the World Research Organization in Geneva, a specialized agency of the UN. The time is 1959. The villain of the times of course is communist Russia.

The negative comments I had seen about this book center around the format and I get it. Reading reports, internal memos, transcriptions of recorded conversations, was at first off-putting. Also each agent was referred to sometimes by last name, sometimes by first. I felt confused.

Reading on despite all I became hooked on the story, figured out the whats and the whys and was thoroughly entertained. I finished the book impressed by an intricacy which kept me guessing, worried and on the edge of my metaphorical seat.

Crossing the African desert in a Cadillac with Paul Christopher, the American operative, a British agent plus his wild girlfriend, a Muslim prince and a Polish scientist suspected of leading a Russian terrorist plot, was the most mysterious yet fun road trip I never actually took.
Posted by Judy Krueger at 10:09 PM