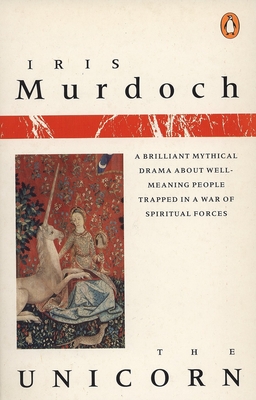 The Unicorn, Iris Murdoch, Viking Press, 1963, 270 pp
This is the eighth novel I have read by Iris Murdoch. As usual I am reading them in order of publication. I find it hard to believe she did not win the Booker Prize until 1978, for her novel The Sea, The Sea. I have been impressed and entertained by each one I have read so far.

The Unicorn is Gothic in feel and setting. It includes her preoccupation with infidelity as well as her philosophic approach to human relationships. A young woman takes a post as governess at Gaze Castle, remote and ancient and crumbling on a desolate coast that feels Irish or Cornish. When Marian arrives she finds no children. Instead she is meant to be a companion and sort of tutor to Alice, a childless woman who has been deserted by her husband. But is that really the true story?

Alice is a recluse in her rooms, given to visions and strange religious compulsions. Marian soon finds herself under the woman's spell but entirely out of her depth among the strange collection of inhabitants in the castle.

There are mysteries. What really happened between Alice and her husband? There are rumors of infidelity and violence. A close friend of the only neighboring family harbors a long term unrequited love for Alice and visits her every summer. Murdoch creates a murky dangerous atmosphere that drew me in page by page with meditations on identity, love, guilt, and reality.

At times the story is so melodramatic, though interspersed with humorous winks at the tragedy being played out, that I would wonder why she wasted her time writing this tale. Marian, young and idealistic, resolves to free Alice from her self-imposed isolation, having determined that it is the others in the household who are keeping her a sort of prisoner. Because Marian doesn't know the half of it, her plans go terribly awry. Thinking she has found an ally in the rejected lover, she becomes confused as to whom she can trust.

In the end, I was won over completely by the creepiness, the wild emotions, the forbidding weather, the rocky cliffs, and raging seas. Feeling a bit played, I finally realized that the author intended to show how life plays us all.

(The Unicorn is available in paperback by order from Once Upon A Time Bookstore.)
Posted by Judy Krueger at 1:06 PM