SHADOW OF THE MOON 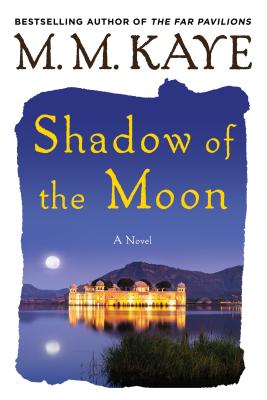 Shadow of the Moon, M M Kaye, St Martin's Press Inc, 1956, 799 pp
Over two decades ago I devoured M M Kaye's The Far Pavillions and Trade Wind. She writes the kind of long books I love: so readable and so historically instructive. Some months ago my blogger friend Helen reviewed Shadow of the Moon on her excellent historical fiction blog, She Reads Novels, reminding me I had missed this one.
After I read The Ministry of Utmost Happiness by Arundhati Roy, I was inspired to learn more about the history of India. I was still too timid to try Salman Rushdie's Midnight's Children again after a failed attempt to read it some years ago, so Shadow of the Moon seemed just the thing. It was!

The British East India Company is in the waning years of its heyday. It is about to morph into the British Raj when its power to rule India passed to Queen Victoria after an uprising that nearly bankrupted the world's most powerful trading company.

The story goes deeply into the results and discontents of misrule. It is actually astonishing how much political history Ms Kaye covers in a novel that reads like a historical romance.

Winter is a typical heroine for novels of this kind. She is naive and romantic, but strong and brave. After a life of sorrows and losses, she gets her happy ending. Life for women in India was difficult in the extreme. Both English and Indian women suffered in many ways, lost babies, died from disease, and had virtually no rights. Winter can be a frustrating character but considering all the trials she survived from the day of her birth, she became a beloved heroine for me.

I admired how well M M Kaye captured that aspect of womanhood where no matter how brave, smart and resilient a woman was, she was forever being left behind to endure pregnancy, childbirth and early motherhood while her husband took off to settle business and political troubles. It's enough to make me want to watch Wonder Woman over and over!

I loved the book. It took me seven days to read 274 pages of Susan Sontag but only four days to read 799 pages by M M Kaye. I do need both novels of ideas and those with propulsive storytelling in my reading life, but Ms Kaye combined the two so seamlessly. Now I actually feel sufficiently girded to tackle Midnight's Children.

(Shadow of the Moon is available in paperback by order from Once Upon A Time Bookstore.)
Posted by Judy Krueger at 12:42 PM