SHEPHERDS OF THE NIGHT 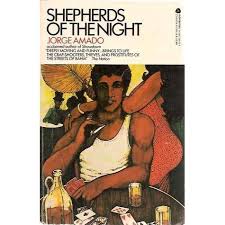 Shepherds of the Night, Jorge Amado, Alfred A Knopf, 1966, 360 pp (translated from the Portuguese by Harriet De Onis, orig published by Livraria Martins Editora, Sao Paulo, 1964)
I have been neglecting my 1964 list lately so I put three on my April reading plan. Jorge Amado was a Brazilian author whose novels about social classes, especially the lower ones, are full of rollicking scenes and expose the hypocrisy of the upper classes. He sets these tales in the Brazilian state of Bahai, where he was born and raised.
(As an aside, when I read translated books for My Big Fat Reading Project, I put them on my lists in the year they were first published, usually earlier than the English translation.)
The "shepherds of the night" in this collection of three character-related novellas, are a group of men who spend their nights drinking rum and bedding their women, many of whom are prostitutes. From the opening page of the book: "We shepherded the night as though she were a bevy of girls and we guided her to the ports of dawn with our staffs of rum, our unhewn rods of laughter."

In the first novella, one Corporal Martim, looked up to by all of these men, commits the unspeakable act of getting married. In its hilarious and poignant pages, his friends expose the wife for the conniving woman she is, break up the marriage, and rescue their dude.

The second novella concerns the christening of a blue-eyed mixed race baby whose mother died and who was brought to his grandfather Massu to be raised. Massu is a large, very large, Negro with a soft, very soft heart. He is part of the gang. Here we get a look at the cross section of Afro-Brazilian voodoo cults and the Catholic Church brought to Brazil by European colonists. Plenty of magical realism brightens up the tale.

Finally, the third novella deals with clashes between the poor, the government and the press. Oh my, this one could have been set in the present as the families connected with the gang of "shepherds" try squatting on a piece of property owned by one of the major industrialists of Bahai who is also a slum lord.

I was not sure I was going to enjoy the book when I started it. I forgot that I almost always feel this way when I begin an Amado novel. (This is my sixth.) Then I get captured by his storytelling skills and lost in his characters' adventures. I was happy to spend a few days in another culture, all the while seeing that human beings are more similar than they are different all around the globe.