FOR THE GOOD OF THE CAUSE 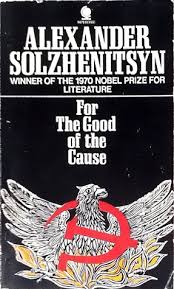 For the Good of the Cause, Alexander Solzhenitsyn, Praeger Publishers, 1964, 94 pp. (Translated from the Russian by David Floyd and Max Hayward)
This short novel was the second of Solzhenitsyn's works to be published in the Soviet Union. When Khrushchev succeeded Stalin, he made an attempt to lighten the worst aspects of his predecessor's rule without undermining the Soviet system.

For the Good of the Cause shows how the hope of better times given to ordinary people was crushed by the vast network of Communist officials wanting to maintain the system that gave them power and authority.

The story is set in a provincial town where the students and staff of a technical school have completed construction of a new building. Their pride and sense of accomplishment are dashed when some higher ups decided to put a new research institute in the building, leaving the technical school in their cramped and inadequate quarters.

When the Head of the school tries to fight this decision he is told the bureaucracy's decision is "for the good of the cause." The Head's investigation uncovers dirty dealing behind the scenes but he is powerless to expose it. Who in Moscow would listen? No one. The book is a chilling portrayal of the outright cruelty of Stalin becoming the more hidden control of "the system."
After the author won the Pulitzer Prize in 1970, this was one of his novels cited by the Soviet government as evidence that Solzhenitsyn was a dangerous man of ideas.  An introduction in the Praeger Publications edition I read tells the full story of the eventual censorship of the author's writing by the Soviet Union.

I read the novel first and then the introduction. It is as if Solzhenitsyn told his own future!
Posted by Judy Krueger at 8:01 PM