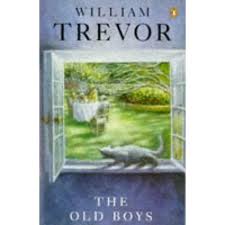 The Old Boys, William Trevor, The Viking Press, 1964, 191 pp
It seems I have been hearing about this author for years, probably because he was shortlisted several times for the Booker Prize. The Old Boys was his second novel. He immediately won prizes and went on to write novels, short stories, and even plays. Whatever he wrote, he kept winning prizes, awards and at last a KBE: Knight Commander of the Most Excellent Order of the British Empire. Though he was born, raised and educated in Ireland, he emigrated to England and stayed there.
I was therefore expecting a great deal as I finally came to William Trevor on the 1964 list of My Big Fat Reading Project. The first unsettling surprise was that the "old boys" are quite old, in their 70s. Why would an author starting out in his 30s write about such old guys?

The plot concerns a coming election for the next president of the Old Boys Association which is connected with the boarding school (called public school in England) these old guys attended. Anyone who has read British literature knows about the cruel and unusual goings on in those places, often leaving people scarred for life. I was not excited about reading another one of those stories.

My boredom with these old boys continued to the end but since the story was contemporary with the early 1960s in Great Britain, I found a little to interest me. This is the time and environment that gave us all those great bands from Britain: the Beatles, the Stones, etc. This was when the rebellion was born.

Though no one in the book starts a band, the story of these guys dredging up all their old friendships and hostilities as they dodder through meetings, had a quaint historical feeling, showing me what the lads of the 60s might have been wanting to shake up.

In fact, many British writers in the 50s and 60s did write about the hidebound, stuffy but crumbling and defeated British class system and mores of the Postwar era: Muriel Spark, A S Byatt, Doris Lessing, Iris Murdoch and more. They eventually moved into more modern stories.

I am sure William Trevor did so as well. Since his writing style is already quite good in The Old Boys, I will keep reading his novels as I move through my reading project, hoping to enjoy them more than I did this one.

Have you read this author? If so, which books did you enjoy the most?
Posted by Judy Krueger at 8:33 PM