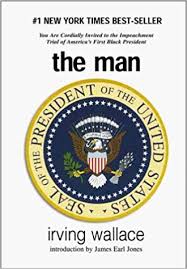 The Man, Irving Wallace, Simon and Schuster, 1964, 766 pp
What an interesting book! It was #5 on the 1964 bestseller list and is an alternate history political novel.

The time is a bit in the future for 1964, post JFK and LBJ, when an unexpected accident kills the current fictional POTUS. The Vice President had died 10 days earlier of a massive coronary. The Speaker of the House died in the same accident that killed the President. So, according to the Presidential Succession Act of 1947, the next in line for President was President Pro Tempore of the Senate.

That is how America got its first (fictional) Black President. Senator Douglass Dilman was a second term senator and a well educated lawyer. While he felt insecure and anxious about assuming the office (and well he should have) he was not an ignorant weak man. But the next in the line of succession was the slick, urbane Secretary of State who wanted the Presidency more than anything.

I have read earlier bestsellers by Irving Wallace (The Chapman Report, 1960, and The Prize, 1962) and while he wrote page turners for sure, I disliked his overly wordy style and his reliance on sleazy detail. These traits are still in abundance in The Man, but his wise and informed explication of racism in American society is almost as good as James Baldwin.

Amidst the dangers of Cold War Russian provocation, radical and violent Black activists, an unscrupulous politician after his job and deeply sorrowful family troubles, Douglass Dilman gets a grip and does his best for the country. Still he is impeached by the political persons who are against him in the House and the Senate.

The story of how he prevails is a stunner. As I read, I got more insight than ever into what Barack Obama faced while in office. A worthwhile and entertaining read that has relevance today.
Posted by Judy Krueger at 6:02 PM