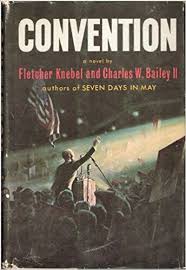 Convention, Fletcher Knebel and Charles W Bailey II, Harper & Row, 1964, 343 pp
This political novel was #10 on the 1964 bestseller list. It is a fictional story of what is said to be the 30th Republican National Convention. In real life, the 30th Convention was in 1972 when Richard Nixon was nominated to run for a second term as POTUS.
In the novel, the year is not stated. The top two contenders for the nomination are the Governor of California and the Secretary of the Treasury, who was the current (fictional) President's stated choice. The polarizing issue was nuclear weapons. The Treasury Secretary was also the predicted winner but after he makes an unwise statement in the early days of the convention, his lead shrinks to almost nothing. Who will win?

These political novels with fictional politicians make me a bit crazy because I cannot stop trying to make them fit with history. I read an earlier bestseller by these authors (Seven Days in May, 1962), about a fictional attempted military coup written during the first year of the Kennedy administration. I have read Fail-Safe as well as Allen Drury's Advise and Consent. The most recent was The Man by Irving Wallace, read just ten days before I read Convention.

I suppose they are worthwhile reads as examples of what could happen. On the whole, I feel much more comfortable reading actual Presidential biographies, each one of which necessarily includes at least one National Convention.

From Convention I learned more than I knew before about what it is like on the convention floor and what the delegates actually do. But there were also plenty of scenes in smoke-filled rooms and the shenanigans connected with the press.

Knebel and Bailey have been mocked as bad writers but they were both respected political journalists who knew the scene. The writing is fast-paced, the characters are believable rather than cliches, and they know how to build and plot a story. Plus, it is women who save the day!

In any case, I am now finished with the bestseller list for 1964! I will try to write a post soon about my thoughts on the list as a whole and how it reflects life in that year.
Posted by Judy Krueger at 2:57 PM