KING OF THE CORNER 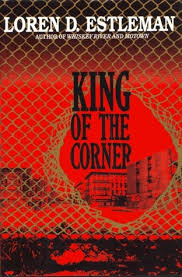 King of the Corner, Loren D Estleman, Bantam Books, 1992, 294 pp
This is the third novel in Estleman's Detroit Crime Series. I have also read the earlier two, Whiskey River and Motown. All are excellent crime fiction and stand out for me because I lived near Detroit from 1967 to 1991.
This one is set during the last year I lived in Ann Arbor. Though I was completely immersed in my job that year, I was vaguely aware that Detroit was in big trouble as a city. Ford Motor Co was basically gone from the Motor City, rampant unemployment was leading to the explosion of Big Crime, and a corrupt mayor leading a rapidly declining population that was more than 50% black completed the disaster.

Doc Miller, a former Detroit Tigers baseball star, has just been released from prison after serving seven years for manslaughter. He is a white guy, now a minority in the city, and broke, with no future in baseball, living with his brother's family, working in his brother's business. Not in the best shape for making decisions.

He is however, a pretty savvy fellow and knows his way around the city despite how much has changed while he was locked up. He takes a job as a driver for a slick and successful bail bondsman, hoping for better income and more interesting work. Instantly he is in the thick of crime, police relations and racial tension. King of the Corner is the story of how he beats the odds and figures out what he wants.

I loved it. Reading the book filled in a lot of gaps left by my former oblivious state. Perhaps readers not familiar with Detroit would be less enthusiastic about the book, but knowing the city like I did for over 20 years, I could picture it all. I could appreciate what Colman Young, the city's first Black Mayor, was up against during those years.

Estleman is just as good as Detroit's more famous Elmore Leonard. I think he violated some of Leonard's Rules For Good Writing by being more literary, more historical and more philosophical, but the literary snob in me leans toward the less famous Estleman.
Posted by Judy Krueger at 12:33 PM