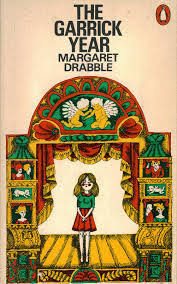 The Garrick Year, Margaret Drabble, William Morrow & Company, 1964, 221 pp
Of the last 19 novels I have read, 15 were written by women. I have reveled in being so immersed in the female point of view and somehow thrilled to be assured there are so many ways to be female.
The Garrick Year is Margaret Drabble's second novel. She is British, the sister of A S Byatt, and a frightfully good writer who is perceptively tart with humorous undertones.

Emma, mother of two small children, is married to an actor in the early 1960s. She has a chance for a career in television, not as an actor but more as some kind of show host. David, her husband, is an actor and equally ambitious for a career in the theater and possibly movies.

When an American heiress funds the renovation of the Garrick Theater in a provincial English town, David is called by the prestigious director to act in several plays for a season there. Emma gives in, not gracefully, so they rent out their London home, set off for Hereford with kids and au pair, and the fireworks begin.

For these two strong and restless as well as self-centered persons in their late twenties, life is never dull, except for Emma's dull hours in a hideous house with her kids. She is a house-proud woman. Emma and David contend, they are so much alike in some ways, they make up with humor and heart.

I loved the book for the characters (after all theater people are all characters, on stage and off), for the tension between this couple, for the absolute truthfulness about the confines of parenthood and fidelity. Emma is one of the great young married mothers I have met in literature. I understood her every emotion and action because I went through all that in my early married days.

The novel captures what it was like for women in the mid 60s when feminism was a barely conceived movement but we were all feeling it and finding our way. It was good to remember how much we loved our loving, our children, but also our freedom.
Posted by Judy Krueger at 11:37 AM